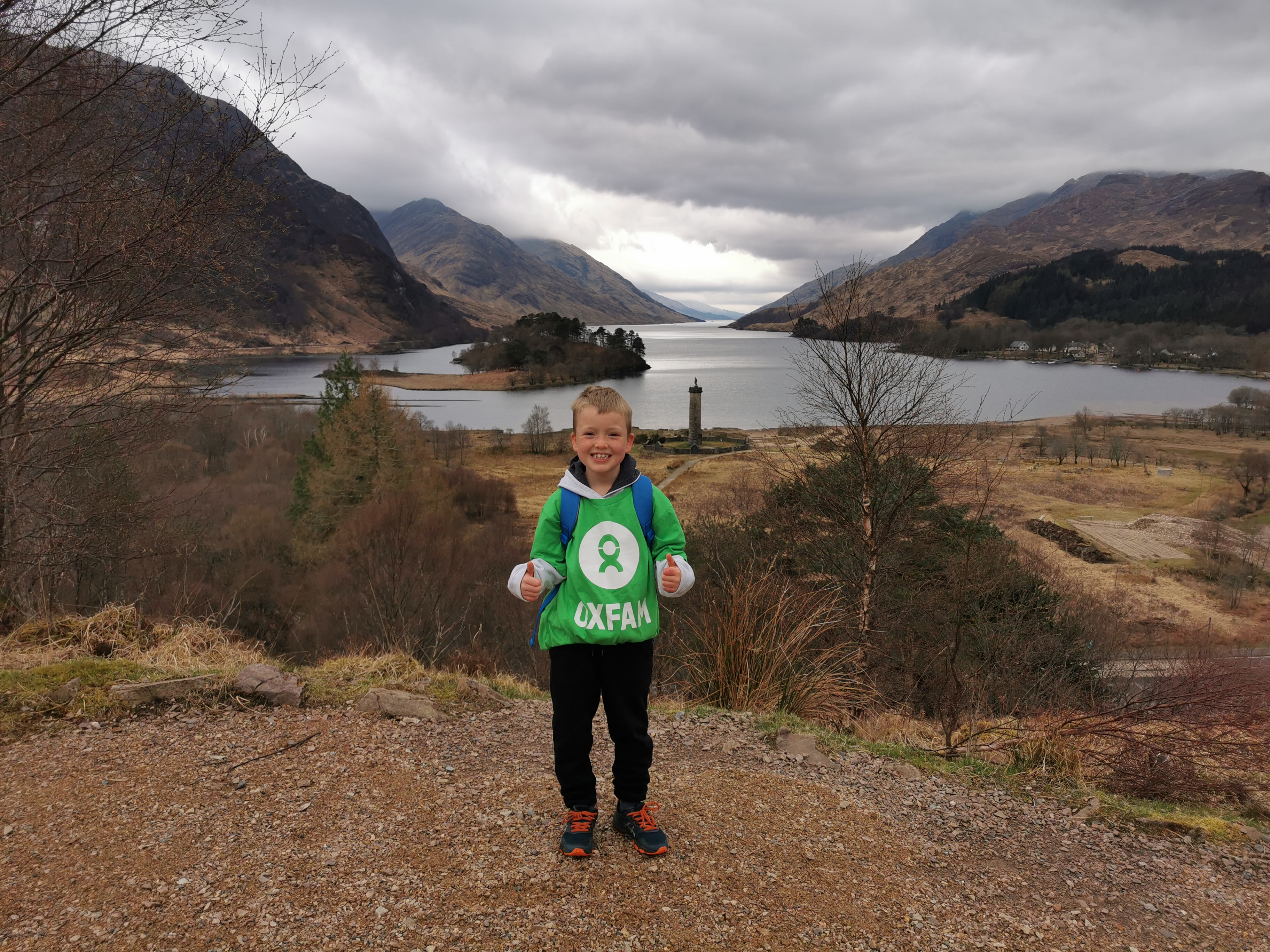 Meet Donnie. Donnie’s 8 years old and live in Caol, near Fort William. During the Easter holidays, Donnie set himself a challenge of doing 20,000 steps every day to raise money for Oxfam’s lifesaving work around the world, racking up an incredible 387,773 steps and raising over £2,000.
Donnie’s mum Donna shares his story.

What inspired Donnie to want to do something to raise money for charity?
I can’t remember how the conversation came about, but somehow we got talking with Donnie and his sister about what fortunate lives they lead. I’d explained that there were some children in the world who have very little to eat and who have to walk miles a day just to access clean water.

Donnie decided he wanted to do something to help children in that position by raising money over the holidays so that wells for clean water could be built. We chose Oxfam to receive the money because of the work you do to help people living in poverty access clean water.

Can you describe the challenge(s) that Donnie took on – what did he do and how difficult was it?

Donnie had a target of doing over 20,000 steps for every day of the school holidays. Over the first weekend of the holidays we as a family did some long walks, the weather was lovely, and it was very enjoyable discovering new places.

But then the weather turned and spending all day out in the rain became less appealing. To get Donnie’s steps out of the way quickly, we jogged the 5km park run Nevis Range route with some friends, which we ended up doing on several days. To make up the rest of the steps Donnie would run up and down the stairs at home or run around the block.

We walked halfway up Ben Nevis on one day: Donnie wanted to keep going but there was still lots of melting snow near the top which we weren’t adequately prepared for, so we’ve promised to take him back another time.

We also ended up walking to Peanmeanach Bothy, which was a lovely walk, but the weather went from being absolutely lovely one minute to snow and hail the next. The whole thing took seven and a half hours!

Were there any days that were particularly tough?

Walking to the top of the Pap of Glencoe was really hard going; it was so steep right from the beginning and it was Donnie’s least favourite walk. He did manage to get chatting to some lovely ladies at the top though who ended up contributing to his fundraising efforts: that really helped him and reminded him why he was doing it.

There were some days where he was just really tired and could quite easily have lay on the couch for the day but each day he got his trainers on and gave it a go. There was one day that was particularly challenging, Donnie was full of the cold and I could see he just really needed to rest but he wouldn’t give up!

How does Donnie feel about how much he’s raised?

He’s completely amazed! We set a target of £50 and to have made over £2,000 is just incredible, he is so grateful to everyone who donated.

How do you feel about what he’s achieved?

I think it is amazing, I am very proud of him, he did so well, we all completely underestimated how difficult it would be to achieve 20,000 steps a day. Although we did all the big walks and runs with him, he did all the extra himself to make sure he got up to his target and that took a lot of dedication. It would have been so easy for him to just give up.

Doing this challenge has been so good for Donnie; it’s given him confidence in his own ability that he didn’t have before and I know he wants to do more to help Oxfam in the future.

Donnie would like to say thank you to his friends and his little sister who encouraged him and joined him on some of these challenges, and we’d both love to say a massive thank you to everyone who donated. We’ve really been taken aback by people’s generosity and by reading all of the lovely messages people have sent; it really helped encourage Donnie to keep going. He hopes the money raised will help some people who really need it.