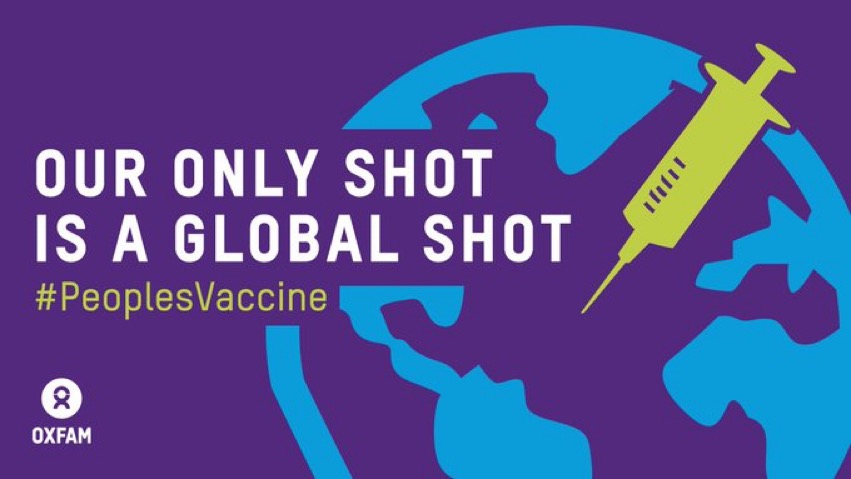 The Scottish Parliament must urgently signal its strong support for the ending of pharmaceutical monopolies which are artificially limiting vaccine supply to low income countries, a coalition of Scottish charities said today.

The charities, including Oxfam Scotland, Christian Aid Scotland, Global Justice Now Scotland, who are all members of the international People’s Vaccine Alliance, say that a ‘vaccine apartheid’ has resulted from a handful of pharmaceutical companies rationing supply by refusing to share their vaccine recipes and know-how with the rest of the world.

Key members of the G7, including the UK and Germany, are currently blocking moves to boost supply by ending companies’ monopoly control of vaccine production. The proposals have been backed by President Biden, the governments of New Zealand and Spain and 100 developing countries.

Ahead of the G7 leaders’ summit this week, the coalition is calling on all MSPs, and First Minister Nicola Sturgeon in particular, to support a new motion in the Scottish Parliament which will urge Prime Minister Boris Johnson to back plans to waive intellectual property rules and insist that the vaccine know-how and technology is shared via the World Health Organisation’s Covid Technology Access Pool, enabling a life-saving ramping up in global vaccine production.

The charities are calling for all parties to unite behind the motion, being laid by Scottish Labour’s Shadow Cabinet Secretary for the Constitution, External Affairs and Culture, Sarah Boyack MSP and send a strong message to the Prime Minister.

Jamie Livingstone, Head of Oxfam Scotland, said: “The vaccine roll out here remains a dominant focus for the Scottish Parliament but Scotland’s politicians can no longer simply spectate as the Prime Minister blocks action to prevent pharmaceutical company bosses from deciding who lives and who dies globally while their companies pocket billions of dollars. The UK Government is standing on the wrong side of history and the Scottish Parliament and First Minister must hold them to account by supporting calls for a people’s vaccine that puts saving lives above patent protection and profits.”

According to the People’s Vaccine Alliance, more than a million people have died from COVID since G7 leaders last met in February and at current vaccination rate low income countries would be waiting 57 years for everyone to be fully vaccinated.

Sally Foster-Fulton, Head of Christian Aid Scotland, said: “Ahead of this week’s G7 meeting, Scotland’s politicians must send the Prime Minister an unequivocal message, that the Scottish Parliament stands united in its opposition to vaccine apartheid. Access to a life-saving vaccine shouldn’t depend on where you live or how much money you have in your pocket. After all, no one is safe until we all are.”

New calculations from the Alliance found that last month people living in G7 countries were 77 times more likely to be offered a vaccine than those living in the world’s poorest countries. The People’s Vaccine Alliance is warning that while COVID is allowed to run rampant across the world, there is a very real risk that mutations could render existing vaccines obsolete, leading to further loss of life, more painful lockdowns in countries around the world, including Scotland, in the near future.

Liz Murray, Head of Campaigns in Scotland at Global Justice Now said: “Rich countries are currently denying some of the world’s poorest access to life-saving vaccines. It’s not just wrong, but also self-defeating and short-sighted. As long as the virus is allowed to spread in other parts of the world, Scotland and the UK’s health and economy will continue to be under threat. Boris Johnson’s intransigence risks prolonging this pandemic for everyone – and Scotland must not be complicit. Nicola Sturgeon needs to speak up and demand the Prime Minister stops protecting the profits of the big pharmaceutical companies while putting all of our lives and futures at risk.”