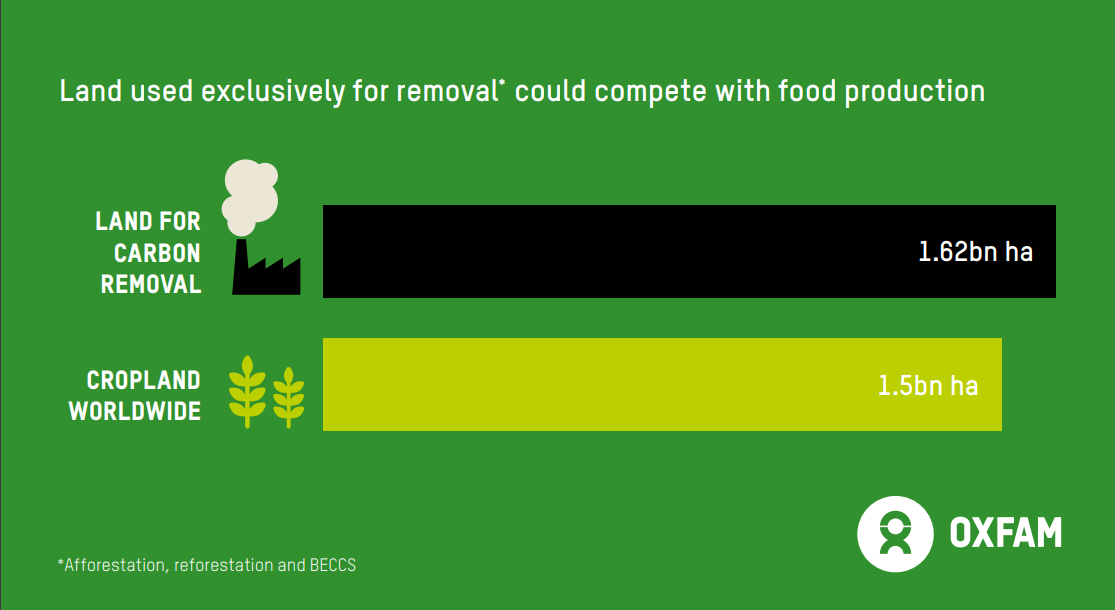 Removing emissions produced by the proposed Cambo oil project near the Shetland Islands would require an area of land one and a half times the size of Scotland, new analysis by Oxfam has revealed.

The Cambo oilfield could produce up to 255 million barrels of oil over its lifetime, releasing an estimated 132 million tonnes of CO2 emissions into the atmosphere. Oxfam is calling on the Scottish Government to condemn the Cambo plans and is urging the UK Government to stop the oilfield from going ahead.

The new analysis coincides with a new global report published today by Oxfam, which estimates that land-hungry ‘net zero’ schemes would require an area equivalent to all the farmland on Earth to be forested, putting food security at risk.

Tightening the Net says that too many governments and corporations are hiding behind unreliable, unproven and unrealistic ’carbon removal’ schemes in order to claim their 2050 climate change plans will be ‘net zero’. Their sudden rush of ‘net zero’ promises are relying too much on vast swathes of land to plant trees in order to remove greenhouse gases from the atmosphere. At the same time, they are failing to cut emissions quickly or deeply enough to avert catastrophic climate breakdown.

Using land alone to remove the world’s carbon emissions to achieve ‘net zero’ by 2050 would require at least 1.6 billion hectares of new forests, equivalent to five times the size of India or more than all the farmland on the planet.

One-fifth of the world’s 2,000 largest publicly listed corporations now have ‘net-zero’ goals that are dependent upon land-based carbon sinks.

Jamie Livingstone, Head of Oxfam Scotland, said: “All of our lives and futures depend on the world’s biggest polluters quickly, drastically and genuinely slashing their emissions, phasing out fossil fuels and investing in clean energy and supply chains. Instead, what we’re seeing is too many net zero strategies being used as smokescreens to mask dirty behaviour: promising unrealistic carbon removal schemes in order to justify the continued plundering of our planet.

“The proposed new Cambo oilfield is a clear climate contradiction. If the UK Government is to be a credible broker for a deal that can stop the planet overheating when it hosts the COP26 climate talks in November it must intervene in the Cambo case and stop its climate credibility going up in smoke. The Scottish Government has a duty to demand it does just that.”

The climate crisis is already devastating agriculture globally. It is driving worsening humanitarian crises, hunger and migration. People living in poverty, particularly women farmers and Indigenous people, are being affected first and worst. It is undermining efforts to tackle poverty around the world.

Oxfam recently reported that global food prices have risen by 40 per cent in the past year which has contributed to 20 million more people falling into catastrophic conditions of hunger and a six-fold increase in famine-like conditions. If used at scale, land-based carbon removal methods such as mass tree planting could see global food prices surging by 80 per cent by 2050.

With less than 100 days left until the UN climate talks in Glasgow, Oxfam says that governments and corporations need a much stronger focus on swiftly and deeply cutting carbon emissions in the near-term, starting at home and with their own operations and supply chains. If ‘net-zero’ targets are used, they should be measurable, transparent and prioritise dramatically slashing emissions by 2030. Removing emissions is not a substitute for cutting emissions, and these should be counted separately.