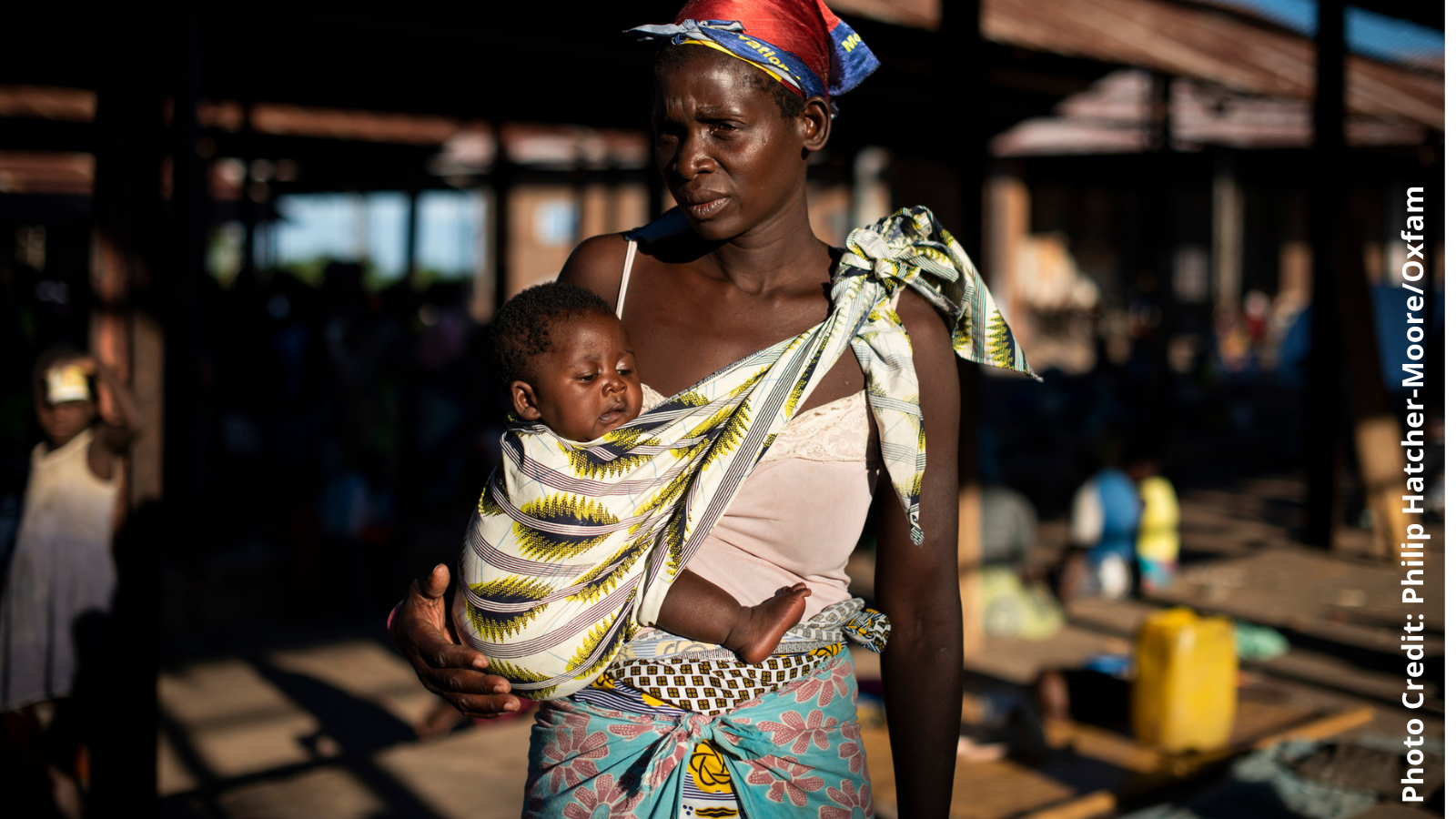 Malita still remembers the night that Cyclone Idai – one of the worst tropical cyclones on record in the Southern hemisphere – struck.

It wasn’t just raining; it was pouring. The local village chiefs were telling everyone to get to higher ground so she ran into her house to grab her children. By this time, the water inside was knee high. ‘I didn’t salvage anything, I just took the children,’ Malita told my Oxfam colleague.

To escape the flood waters, Malita climbed a tree, with one of her children on her back, another on her front, and pulling the last one up by the hand. ‘For two days we were in the tree with no food, and the rain was still falling,’ she said. It took three days for a canoe to rescue them.

Cyclone Idai made landfall in March 2019, killing over 1,000 people across Mozambique, Malawi and Zimbabwe and leaving 2.6 million people in desperate need of humanitarian assistance. Catastrophic damage, caused by strong winds and extensive flooding, wiped away harvests and destroyed seed stocks. Millions of people like Malita lost their homes and livelihoods.

Cyclone Idai is just one of a number of extreme weather events to have hit Southern Africa in recent years. Idai landed five months into a drought that left millions in need of food aid – the third severe drought to hit the region in the space of five years. Less than six weeks after Idai, Cyclone Kenneth battered northern Mozambique.

The climate impacts we’re seeing across southern Africa reinforce the findings of the world’s leading scientists, who over the summer delivered their starkest warning yet that human activity is causing unprecedented changes to the Earth’s climate, including more intense heatwaves and more extreme weather events. With some of the changes now inevitable and irreversible, the UN Secretary General branded the findings a ‘code red for humanity’.

The climate peril facing us all underlines the gravity of the upcoming global climate talks in Glasgow. We know what action’s needed: faster, deeper and fairer emissions cuts, coupled with more financial support for countries who are bearing the brunt of the climate emergency but who are least able to cope with its impacts.

But instead of driving down emissions, the latest projections say that global emissions will actually increase this year. And instead of delivering on their promise to mobilise $100 billion a year by 2020 to help poor countries cope with and adapt to climate change and cut their own emissions, rich countries are set to short change us by £55 billion by 2025. Worse still, 70% of the money they coughed-up in 2019 was in the form of loans, driving up low-incomes countries’ debt.

The  cruel irony is that people like Malita and her children – who did the least to cause the climate crisis – will pay the price; with their lives, homes and livelihoods.

Countries that enriched themselves on high-carbon activities cannot side-step their unpaid climate debt to countries like mine. As President of COP26, the UK Government has a huge responsibility to ensure that’s not the case, while galvanising global action.

And as home to the host city, the Scottish Government has a role to play too. News that Scotland’s Climate Justice Fund will double after a five-year freeze is a very welcome contribution to plugging the major gap in climate finance globally. It should now go a step further and raise these funds through a new tax on high emitters, sending a powerful message that climate change isn’t just a matter of science, technology and economics: it’s a matter of justice.

Every crisis needs a tipping point, and, for Malita’s sake and for all of our sakes, the COP26 talks in Glasgow must provide it.