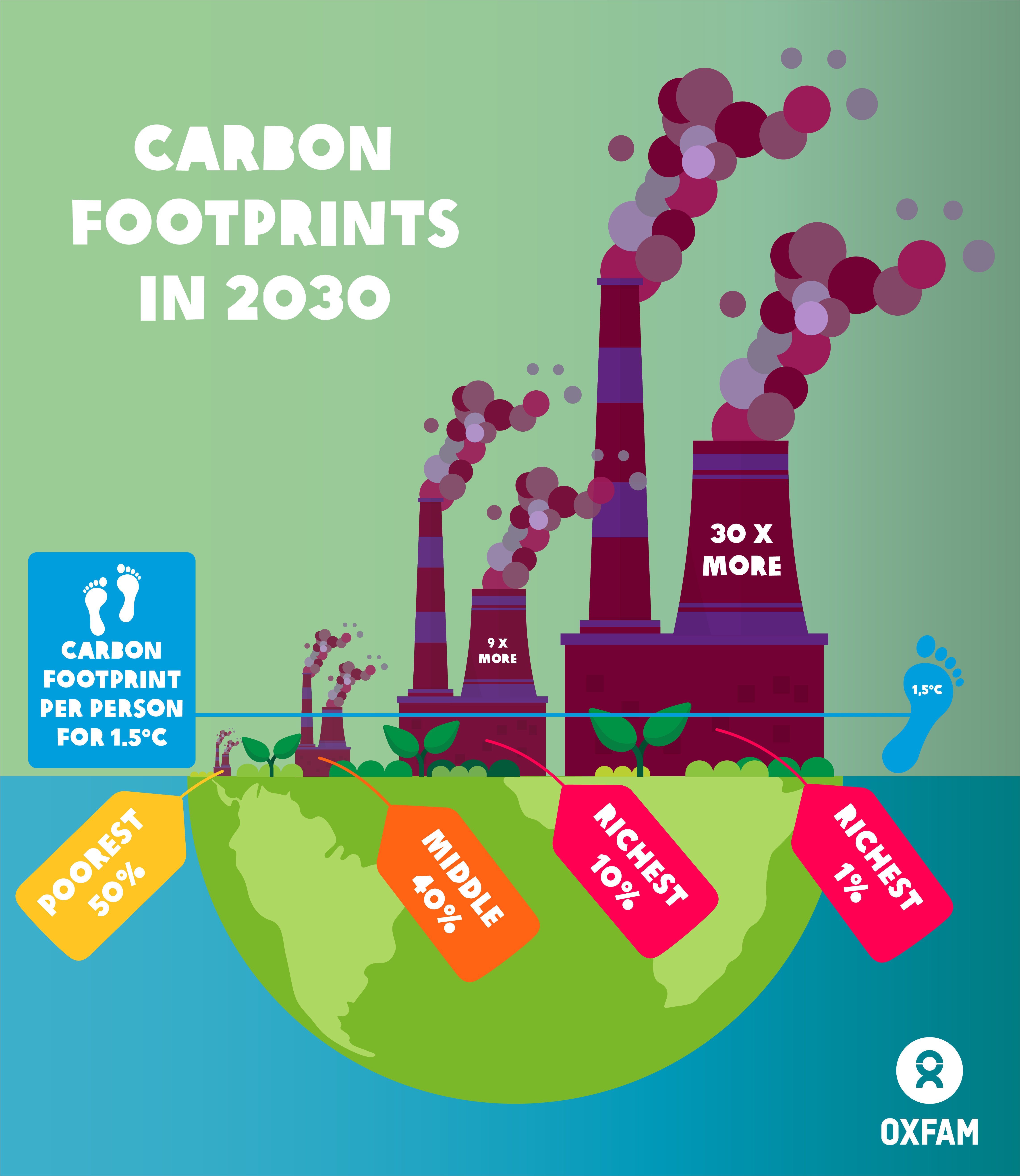 The carbon footprints of the richest 1 per cent of people on Earth is set to be 30 times greater than the level compatible with the 1.5°C goal of the Paris Agreement in 2030, according to new research out today. It comes as delegates grapple with how to keep this goal alive at the COP26 meeting in Glasgow.

In 2015, governments agreed to the goal of limiting global heating to 1.5°C above pre-industrial levels, but current pledges to reduce emissions fall far short of what is needed. To stay within this guardrail, every person on Earth would need to emit an average of just 2.3 tonnes of CO2 per year by 2030 – this is roughly half the average footprint of every person on Earth today.

Today’s study, commissioned by Oxfam based on research carried out by the Institute for European Environmental Policy (IEEP) and the Stockholm Environment Institute (SEI), estimates how governments’ pledges will affect the carbon footprints of richer and poorer people around the world. It treats the global population and income groups as if they were a single country. It finds that by 2030:

But in a sign that the 2015 Paris Agreement is having some impact, the middle 40 per cent are on course for per capita emissions cuts of 9 per cent from 2015 to 2030. This is a turnaround for a group, which is mostly made up of citizens in middle-income countries like China and South Africa that saw the fastest per capita emissions growth rates from 1990 to 2015.

Jamie Livingstone, Head of Oxfam Scotland, said: “The luxury lifestyles and continued plundering of the planet by the world’s richest people are placing us all in ever graver peril. The emissions from a single space flight on Jess Bezos’ rocket would exceed the lifetime emissions of someone in the poorest billion people on Earth. No one is immune from the impact of the climate emergency, but it’s the world’s poorest who are paying the heaviest price despite contributing least emissions as they battle floods, famines and cyclones.

“COP26 is a moment of truth in the fight against climate change: global leaders must agree ways to curb excessive emissions and limit global heating and they must do it here and now in Glasgow. Delay costs lives.”

Tim Gore, author of this briefing and Head of the Low Carbon and Circular Economy programme at IEEP, said: “The global emissions gap to keep the 1.5°C Paris goal alive is not the result of the consumption of most of the world’s people: it reflects instead the excessive emissions of just the richest citizens on the planet. To close the emissions gap by 2030, it is necessary for governments to target measures at their richest, highest emitters – the climate and inequality crises should be tackled together. That includes both measures to constrain luxury carbon consumption like mega yachts, private jets and space travel, and to curb climate-intensive investments like stock-holdings in fossil fuel industries.”

Emily Ghosh, Scientist at Stockholm Environment Institute says: “Our research highlights the challenge of ensuring a more equitable distribution of the remaining and rapidly diminishing global carbon budget. If we continue on the same trajectory as today the stark inequalities in income and emissions across the global population will remain, challenging the equity principle at the very heart of the Paris Agreement. Analysis of carbon inequality must urgently be put at the centre of governments efforts to reduce emissions.”

Oxfam said world leaders should focus on targeting deeper emissions cuts by 2030, in line with their fair share, and ensure that the richest people worldwide and within countries make the most radical cuts. The richest citizens have the potential to speed up this process dramatically, both by leading greener lifestyles but also by directing their political influence and investments towards a low-carbon economy.

Copies of the briefing Carbon Inequality in 2030: Per capita consumption emissions and the 1.5C goal, are available on request.

The report was commissioned by Oxfam and authored by Tim Gore, IEEP, based on research carried out by IEEP and SEI.

Today’s briefing is based on an analysis of the impact of unconditional Nationally Determined Contributions (NDCs) submitted up to September 2021 under the Paris Agreement on the per capita consumption emissions of different global income groups.

The UNEP Emissions Gap Report 2021 estimates that total global emissions will need to fall to approximately 18 Gt CO2 (25 Gt CO2e) per year by 2030, on a pathway to net zero emissions by mid-century, in order to have a reasonable chance of limiting global heating to 1.5°C. This works out to approximately 2.3 tonnes CO2 per person per year (per capita emissions) in 2030.

This briefing builds on last year’s report from Oxfam and SEI which estimated that the richest 1 per cent of people on Earth is responsible for twice the carbon emissions of the poorest 50 per cent from 1990 to 2015.

Carbon emissions per passenger for a space flight are estimated to be at least 75 tonnes, according to a recent report by Lucas Chancel.  Jeff Bezos’ rocket Blue Origin holds four passengers. People in the poorest billion emit less than one tonne of carbon per year.

The Stockholm Environment Institute is an international non-profit research and policy organization that tackles environment and development challenges.