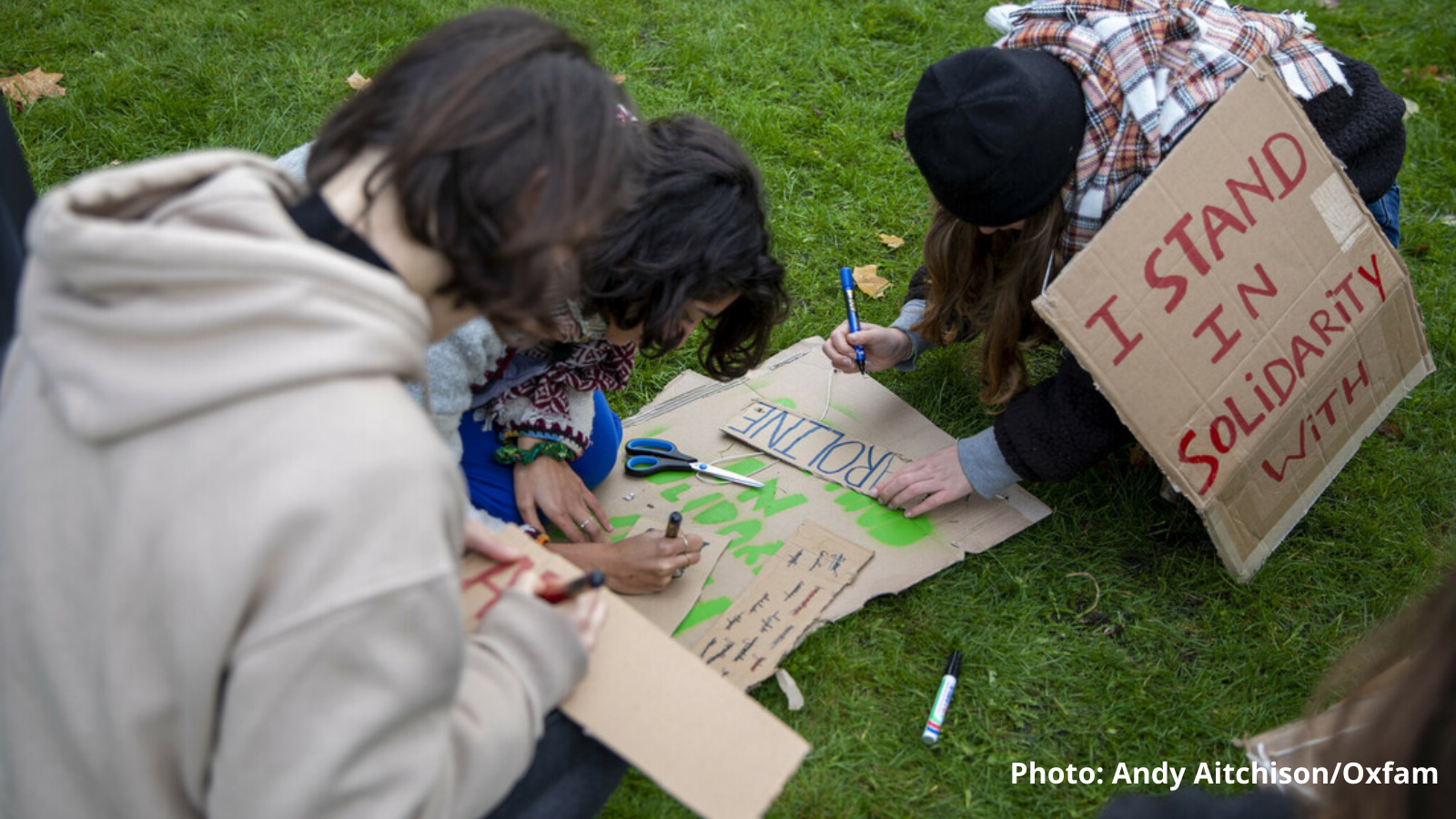 By Jamie Livingstone, Head of Oxfam Scotland and Board Member of Stop Climate Chaos Scotland

The next few days are a litmus test for humanity.

As the COP26 negotiations reach their critical stage, the eyes of the world remain on Glasgow.

They are watching closely to see if world leaders will commit to delivering the urgent action needed to avert the worst impacts of the climate emergency facing us all. After all, as the UN Secretary General has warned, “Either we stop it – or it stops us”.

So far, we’ve heard some relatively promising words. But the final days of COP need to be about much more than warm words: this is a moment of truth for the world.

And there’s plenty work to do because, right now, we’re very concerned at the lack of momentum.

We’ve seen a plethora of welcome pledges, from tackling deforestation to reducing methane emissions, but these are non-binding commitments and they lack the level of detail needed to give confidence they will be delivered. And, critically, we cannot allow ourselves to be distracted: we must see detailed commitments in the negotiated outcomes. We must put the substance, before the style.

Yesterday, former US President Barack Obama entered the fray, a man whose leadership was integral to the securing of the Paris Agreement over five years ago. COP26 is the first real test of that Agreement.

A key element in the deal secured in Paris was that countries would increase their ambition over time to limit temperature rises to 1.5C – the critical threshold between dangerous and catastrophic climate change.

Right now, their collective commitments instead put the world on track for a devastating 2.7C of warming by 2100. That outcome is simply unthinkable.

Now is the time for the UK Presidency, and the Prime Minister, to lead from the front – the job is very far from done. They must secure a deal that compels all countries to increase the ambition of their climate plans for 2030, in line with their fair share of cutting global emissions.

And it cannot leave the least developed countries to battle climate change without the support they need. No amount of smoke and mirrors will obscure a failure by rich, developed nations to deliver upon the $100 billion year they have promised, or to ramp up the share of this cash dedicated to supporting communities to adapt.

As home to the host city of COP, Scotland is well placed to help inspire greater global climate action and the Scottish Government has been keen to highlight its own record on tackling climate change. But as the First Minister herself acknowledges, it’s easy to be a world leader when the bar is low.

On paper, Scotland has a relatively strong record on climate action; we have some of the most ambitious, legally binding emission reduction targets in the world and our emissions have halved since 1990. The Scottish Government has also shown strong leadership at COP in its efforts to stand in solidarity with the world’s poorest countries, who did least to cause the climate crisis but live with its deadly consequences of floods, famine and cyclones. The voices of these communities too often go unheard at events like COP.

Voices like those of Margaret Masudio, a small holder farmer from Uganda, who has been in Glasgow representing the millions of farmers like her all over the world struggling to survive thanks to climate change. “We are very worried”, she told me. “We are worried for our children. How do we survive? If right now, the hardship we are facing is at this level, how about the future?”

Working with Stop Climate Chaos Scotland, the Scottish Government gave Margaret and others from developing countries a platform at COP, a rare chance to be heard and to share their priorities for climate action. But it isn’t enough to just listen to people; governments must act on their concerns.

Even at today’s 1.1°C of warming, we are all witnessing more frequent and devastating climate impacts around the world. And the world’s poorest countries are footing the bill for a climate crisis they did little to cause.

We saw a glimmer of hope at the start of the opening week of COP when Scotland stepped forward and became the first rich nation to explicitly commit to finance to support developing countries who have already suffered irreversible impacts of the climate crisis. Other countries must now follow Scotland’s small, but significant lead by offering dedicated financial support to countries where lives have already been lost and ruined because of climate change.

But for Scotland’s climate example to be genuinely credible, it must ensure it is reducing its own emissions at the speed needed: and here, our record is imperfect. We’ve had a hattrick of misses in regards to our emissions targets; own goals we simply can’t afford to repeat.

And for Scotland, the elephant in the room at COP26 is oil and gas, with the UK Government poised to green light a massive new oilfield off the coast of Shetland. We simply can’t afford to go drilling for more oil and gas when the planet is on fire – it would be a clear climate contradiction.

The UK Government must urgently block the Cambo development but the First Minister must make her own opposition clear, telling the Prime Minister ‘not in our backyard, not on her watch and not in Scotland’s name’. Such political bravery is exactly what the world needs to see during the final week of COP.

Glasgow has the chance to put itself on the map as the place where world leaders finally got their act together. The choices they make are the difference between life and death. The planet’s alarm bells are ringing. Delay costs lives.