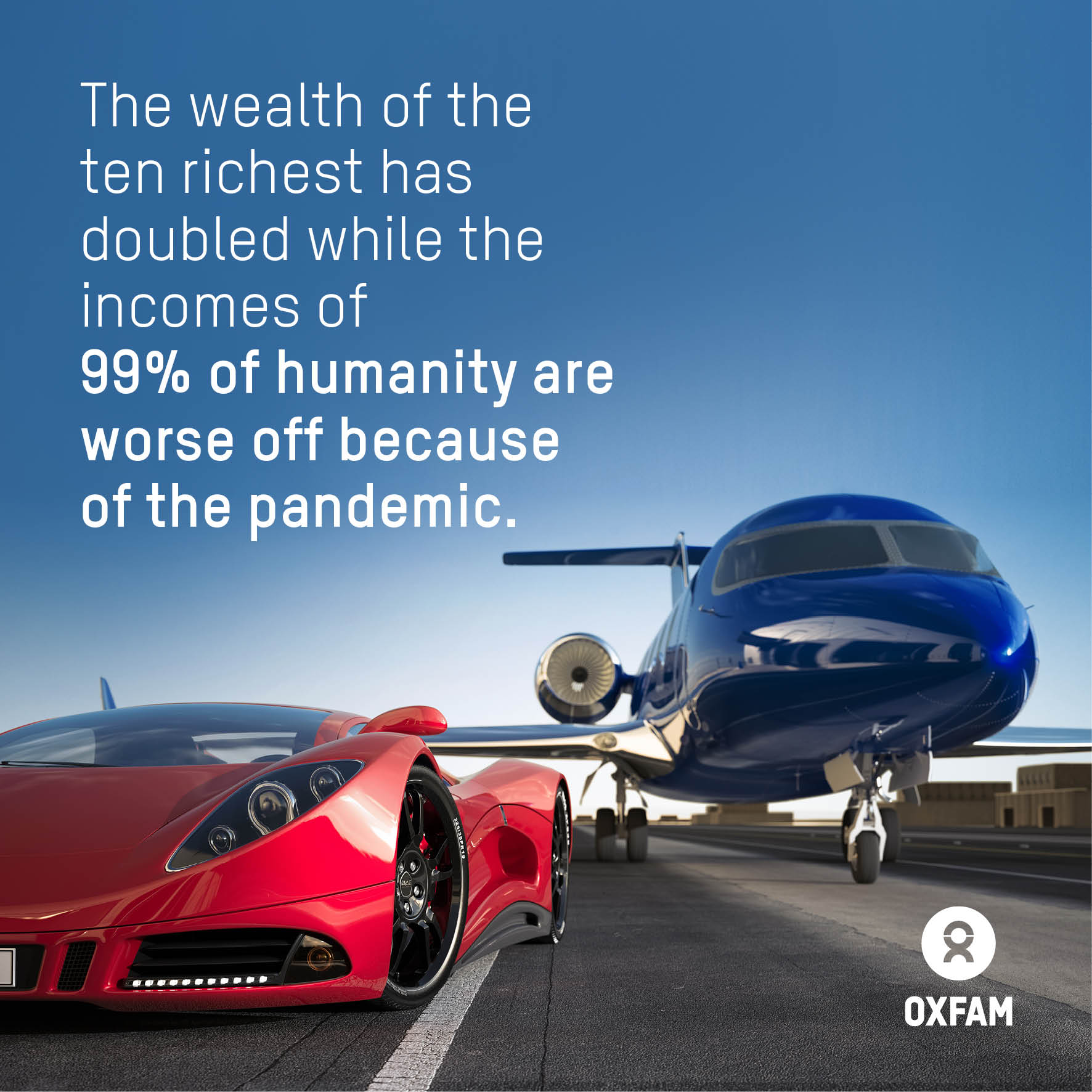 A new billionaire has been created every 26 hours since the pandemic began.

Let that fact sink in.

Now consider this: in the same period, the world’s 10 richest men have doubled their fortunes, while some have even launched themselves and their friends into space.

Meanwhile, millions have died needlessly because they did not get a vaccine, a shameful stain on the history of humanity. The poorest people and racialised groups number disproportionately highly amongst the 17 million people killed by Covid and neglect. A further 160 million people, at least, are projected to have been pushed into poverty.

These are the startling statistics behind the key finding of a new global report by Oxfam this week: that inequality is not just damaging, it’s deadly.

In fact, we estimate that inequality is contributing to the death of at least one person every four seconds, a highly conservative estimate based on the number of deaths from hunger, the denial of access to high-quality healthcare in poor countries, and gender-based violence.

But inequality is not just killing people, it’s also killing our planet.

Just twenty of the richest billionaires are estimated, on average, to be emitting as much as 8,000 times more carbon than the billion poorest people put together.

In fact, the wealthiest 1% are responsible for twice the emissions of the poorest 50%.

Yet it is the poorest people who suffer most from the climate crisis. Many face losing their homes and livelihoods as they live in areas more vulnerable to extreme weather and hold the least assets with which to recover after disasters.

Women living in poverty are disproportionately affected: for example, being forced to take on more unpaid care work to support members of their families and communities suffering poorer health due to increased pollution and heat waves associated with the climate crisis.

Tackling such grotesque inequality must be the centrepiece of climate action globally, including within Scotland.

Just two months ago, at COP26, the First Minister rightly recognised Scotland’s collective duty – as a country that became rich thanks to carbon intensive activities – to offer financial support to countries facing the irreversible impacts of climate change.

This wasn’t charity, she said, but reparations – a small but important recognition of Scotland’s historic and ongoing contribution to the climate crisis.

But, as she seeks to end a run of three missed annual emissions targets in a row in Scotland, Nicola Sturgeon must place justice at the heart of climate action here too.

While cutting emissions quickly requires action in key high-emitting sectors, like agriculture, action is also necessary to curb the over-consumption of the biggest polluters – those with the highest incomes and wealth – while clawing back their wealth to fund wider climate action.

Encouragingly, the Scottish Government has recognised the role of taxation in encouraging behaviour change by increasing the cost of harmful behaviours. An obvious place to start is taxing high-carbon activities like flights, the vast majority of which are made by the richest people.

A recent report by the UK Committee on Climate Change highlighted that Scotland’s emissions from aviation are more than 50% higher than they were two decades ago and bemoaned the Scottish Government’s lack of “explicit intent” to limit demand.

In the Government’s upcoming Aviation Strategy, we’d like to see ministers robustly explore taxing frequent fliers who are making the climate crisis worse, as suggested late last year by  a majority of the 100 members of the public who took part in Scotland’s landmark Climate Assembly. At best, this could cut aviation demand and therefore emissions, at worst it would generate money for wider climate action.

At a time when inequality is killing people, and our planet, the First Minister can demonstrate to the rest of the world that such solutions are within our grasp.