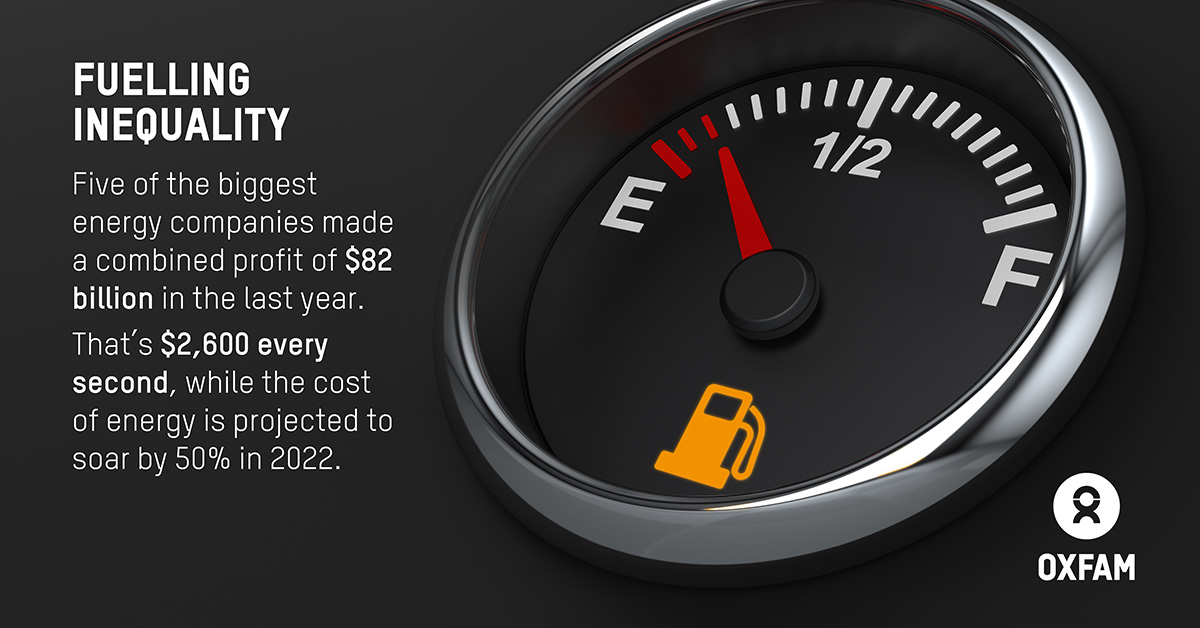 As food and energy prices rise to their highest level in decades, billionaires in these sectors have seen their fortunes rise by $453 billion in the last two years – equivalent to more than $1 billion every two days, a new Oxfam report reveals today.

Global food prices have spiraled by over 30 per cent in the past year and 62 new food billionaires have been created over the last two years. Cargill, one of the world’s largest food traders, now counts 12 family members as billionaires, up from eight before the pandemic.

Profiting from Pain is published as governments, business leaders and billionaires are meeting at the World Economic Forum in Davos for the first time in person since the pandemic began, and as rapidly rising food and energy prices hit the incomes of the poorest hardest. Oxfam recently warned that rising inequality could push a further 263 million people into extreme poverty in 2022, reversing decades of progress.

People in low-income countries spend more than twice as much of their income on food than those in rich countries, with those living through drought and conflict particularly vulnerable. In East Africa 28 million people are at risk of severe hunger.

Meanwhile, across the UK, including in Scotland, rising living costs are heaping huge extra pressure on households already struggling with the consequences of low incomes.

Today’s report shows that unprecedented and dramatic increases have seen 573 new billionaires created during the two years of the pandemic, at the rate of one every 30 hours. Billionaires’ combined wealth now stands at $12.7 trillion, equivalent to 13.9 per cent of global GDP – a three-fold increase from 2000 when it stood at 4.4 per cent. The fortunes of the richest 20 billionaires are greater than the entire GDP of Sub-Saharan Africa.
The research also found that five of the largest energy companies – BP, Shell, TotalEnergies, Exxon and Chevron – are making a combined profit of $2,600 every second. Their profits are at a five year high, having increased by 45 per cent, and earnings growth for the industry far outstrips that of any other.

“It is morally indefensible that people in East Africa are dying of hunger while the fortunes of the world’s super-rich are fuelled by skyrocketing food and energy prices. There simply can be no excuse for governments not addressing gargantuan profits and wealth to ensure that no one is left behind.

“Introducing wealth taxes, for example, would raise huge sums that could help vulnerable groups to survive this crisis and build a better future. Here in the UK, a windfall tax on energy companies by the UK Government would be a strong place to start.

“In Scotland, frontline support services are urgently sounding the alarm about the financial pressures faced by those on low incomes, many of whom were already struggling before the pressures of the pandemic and the cost of living crisis.

“They warn the worst is yet to come. Ultimately, this is about people simply not having enough income to cover their basic living costs – that cannot continue.

“Globally, at UK level, and in Scotland, all governments must look to raise revenues from those with the most to ensure those in, or at risk of, poverty have an adequate income.”

In the UK, prices are rising at their fastest rate for 40 years with inflation hitting nine per cent.
Today’s Oxfam report is global in focus, but data from just before the pandemic showed that in Scotland a typical household in the wealthiest 10 per cent had 223 times more wealth than one in the least wealthy 10 per cent (£1.7 million compared to £7,600).

At the same time, even before the recent sharp increases in the cost of living, 19 per cent of the population in Scotland were living in poverty, rising to 24 per cent of children – some 240,000 children each year – and as high as 38 per cent for single women with children.

The enlarged Scottish Child Payment will undoubtedly offer some extra relief for low-income families in Scotland compared to the rest of the UK, but there are serious doubts that the Scottish Government’s £150 council tax discount offers anywhere near enough to those struggling to pay soaring bills.

Today’s global research shows that the pandemic has also created 40 new pharma billionaires. Pharmaceutical corporations like Moderna and Pfizer are making $1,000 profit every second from their monopoly control of the Covid-19 vaccine, despite its development having been supported by billions of dollars in public investments.
The International Monetary Fund, Organisation for Economic Co-operation and Development and EU have all proposed that governments impose windfall taxes on energy companies’ record profits. Italy has become the first country to do so.

Covid-19 is already set to drive the biggest systemic increase in income inequality ever seen, with a particularly disastrous impact on women who have been disproportionately pushed out of employment. Globally increased unpaid care work has prevented millions of women from rejoining the workforce; the gender pay gap has now widened and is projected to take 136 years to close, up from 100 before the pandemic.

• Introduce one-off solidarity taxes on billionaires’ pandemic windfalls to fund support for people facing rising food and energy costs and a fair and sustainable recovery from Covid-19. Argentina adopted a one-off special levy dubbed the ‘millionaire’s tax’ and is considering a windfall tax on energy profits as well as a tax on undeclared assets held overseas to repay IMF debt.

• End crisis profiteering by introducing a temporary excess profit tax of 90 per cent to capture the windfall profits of big corporations across all industries. Oxfam estimates that such a tax on just 32 super-profitable multinational companies could have generated $104 billion in revenue in 2020.

• Introduce permanent wealth taxes to rein in extreme wealth and monopoly power, as well as the outsized carbon emissions of the super-rich. An annual wealth tax on millionaires starting at just two per cent, and five per cent on billionaires, could generate $2.52 trillion a year —enough to lift 2.3 billion people out of poverty, make enough vaccines for the world, and deliver universal healthcare and social protection for everyone living in low- and lower middle-income countries.

Oxfam’s calculations are based on the most up-to-date and comprehensive data sources available. Figures on the very richest in society come from the Forbes billionaire list.

All amounts are expressed in US dollars and, where relevant, have been adjusted for inflation using the US consumer price index.

The Resolution Foundation analysis on UK living standards, including fuel stress can be found here.

The World Bank defines extreme poverty as living on less than $1.90 per day.

Data for Scotland is taken from the Scottish Government’s Poverty and Income data sets. Note: the data used in this press release is from 2017-2020, as data collection was disrupted during the pandemic, and therefore an official update has not yet been released.