The scale of the disaster is staggering and the Committee is raising funds to help some of the 6 million people in desperate need of assistance. Overall, 33 million people – one in seven Pakistanis – are estimated to be affected. One third of the country is estimated to be underwater, an area equivalent to the size of the UK.

More than a million homes have been destroyed or badly damaged, leaving many people homeless, exposed to the elements and without clean water or sanitation. There is a high risk of water-borne diseases spreading, with cholera already detected. Food stocks and supplies have been swept away, with 2 million acres of crops affected and over three quarters of a million livestock lost, leaving people in need of food support in the immediate and longer term.

The UK Government has confirmed it will match donations to the appeal up to £5 million.

Nadeem Baqir, DEC spokesperson in Scotland said: “The scenes we are witnessing today in Pakistan are truly shocking. By working together with our member charities, and their local partners on the ground, and the DEC’s national media and corporate partners, we hope to reach millions across Pakistan who are in urgent need of immediate help to survive.”

The DEC brings together 15 leading aid agencies at times of crisis overseas – including six agencies active in Scotland, namely Islamic Relief Scotland, Oxfam Scotland, the British Red Cross, Tearfund Scotland, Save The Children and Christian Aid Scotland. Eleven of these are responding in Pakistan either directly or through local partners.

Oxfam’s response is working with a network of local partner organisations and relief efforts will focus on two of the hardest-hit provinces of Balochistan and Sindh in the south-west of the country. The Oxfam response will target 25,000 families and households affected by the floods.

Oxfam’s partners are already working to help displaced people and they will decide on the most important support that local people most need, but efforts will likely be concentrated on emergency food, water and sanitation, including things like personal hygiene kits and temporary shelters.

Oxfam Pakistan staff say the wild and heavy monsoon rain has produced a climate-induced humanitarian crisis of epic proportions. Pakistan has declared a national emergency with more than 33 million people, or 15 percent of the population, affected; more than 1,000 people killed; a million homes and two million hectares of crop lands destroyed. These figures will grow. 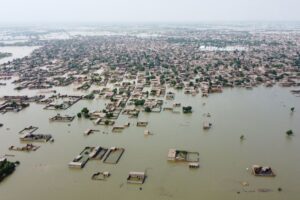 Farah Munawar, Resilience and Livelihoods Project Manager, Oxfam Pakistan, said: “Many of those who have lost their homes are now living on roadsides, leading to serious security and safety issues specifically for women and girls, but also the wider community.

Syed Shahnawaz Ali, Country Director, Oxfam Pakistan, said: “We have to say it as it is — the humanitarian and environmental devastation we are experiencing is a result of climate change. Floods are not uncommon in Pakistan, but this is flooding on a scale bigger than anything we have ever seen.

“The rain patterns have become very unpredictable, and we are bracing for further downpours in September. It seems very likely that the scale of the challenges we face are bigger than we have seen reported so far. Further work is required to assess the full extent of this unfolding crisis.

“Oxfam is ramping up relief efforts and we’re calling for coordinated international action to tackle the enormous scale of this catastrophe. Only a well-resourced international response can prevent further loss of human life and injury over the coming weeks and months.”

DEC appeal films to raise funds to support this work will be broadcast on the BBC, ITV, Channel 4, Channel 5 and Sky as well as BBC and commercial radio.

Every pound donated by the UK public to the DEC Appeal will be matched by the UK government through its UK Aid Match scheme up to the value of £5 million. This support will double the impact of the public’s own donations and will ensure that charities working on the ground in Pakistan can reach those in urgent need of help.

Eleven of the DEC’s 15 member charities are confirmed to be responding either directly or through trusted local partners and will receive funds from this appeal, with others currently assessing the situation. The 11 members responding so far are Action Against Hunger, Age International, British Red Cross, CAFOD, CARE International UK, Concern Worldwide UK, International Rescue Committee UK, Islamic Relief Worldwide, Oxfam GB, Save the Children UK and Tearfund.

The UK government will match, pound for pound, the first £5 million of public donations to the DEC Pakistan Appeal through the Foreign, Commonwealth and Development Office’s UK Aid Match scheme. This is part of a £16.5m package of support to provide immediate help to people living in the most hard hit areas.

Through UK Aid Match the Foreign, Commonwealth and Development Office gives the British public the opportunity to have a say in how the UK aid budget is spent whilst boosting the impact of the very best British charities to change and save the lives of some of the world’s poorest and most vulnerable people. UK government match funding will double British public’s own donations to the DEC appeal up to £5 million and will ensure that DEC member charities working on the ground can reach even more people in need.

UK Aid Match has increased the impact of a number of DEC appeals to help those in need around the world, including most recently to support people affected by the conflict in Ukraine and to provide life-saving humanitarian aid to people in desperate need in Afghanistan.

Through UK Aid Match, FCDO gives the British public the opportunity to decide how the UK aid budget is spent and support people in desperate need by matching their donations pound-for-pound. Any queries about UK Aid Match should be directed to the FCDO news desk on 020 7008 3100 or newsdesk@fcdo.gov.uk.