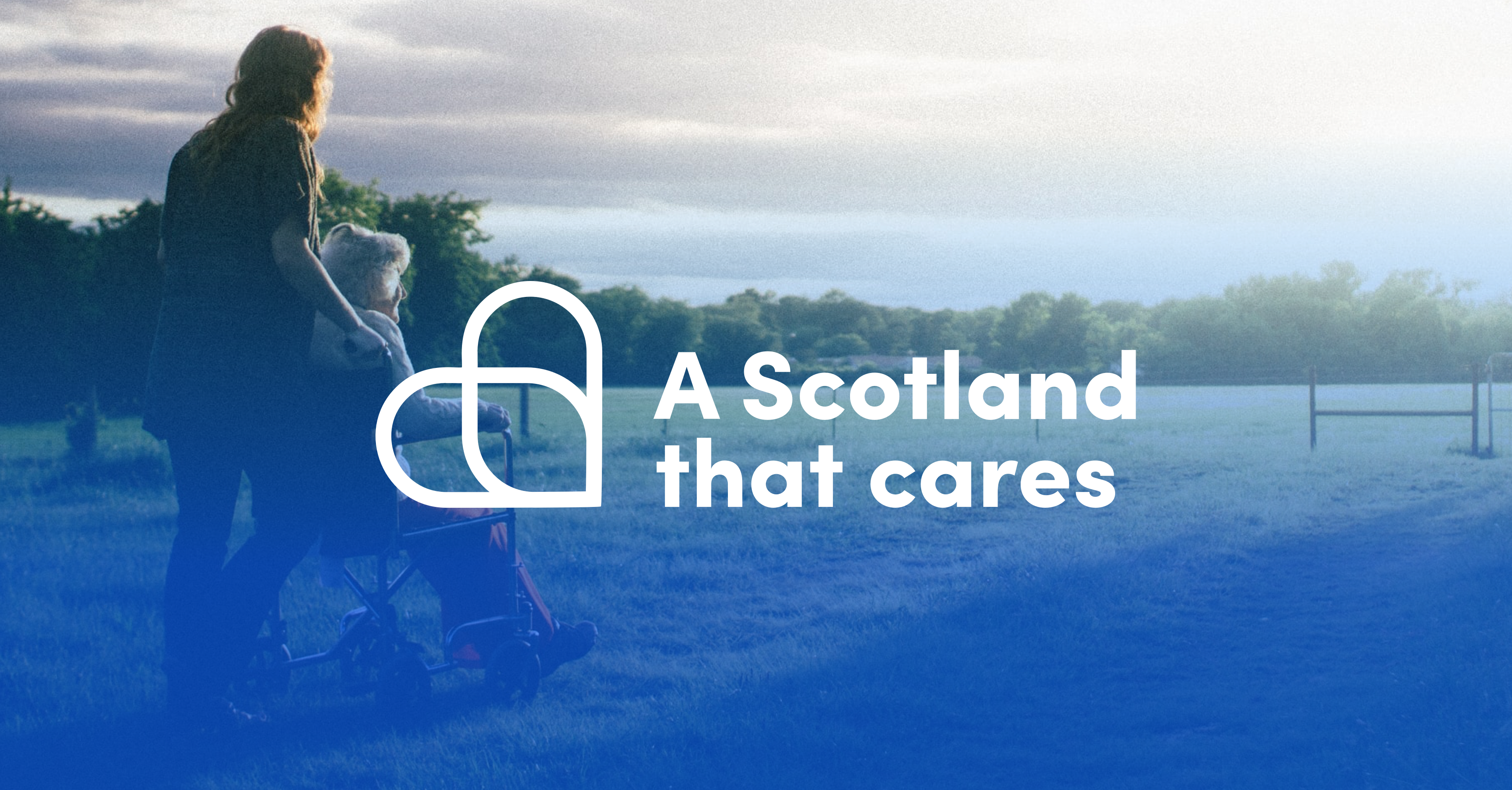 Members of the public are being urged to back the campaign for a landmark “National Outcome” to value and invest in care and carers in Scotland.

A unique group of more than 45 organisations is urging people across Scotland – and particularly those with direct experience of any form of care or caring – to back a major campaign for a new “National Outcome” on care.

The “A Scotland that cares” campaign says those who experience and provide care, including paid care workers, unpaid carers, and parents, have been undervalued for too long, with many facing deep financial and personal pressures.

The organisations say the situation was significantly exacerbated by the Covid-19 pandemic and is now being made even worse by the cost-of-living crisis. Frontline and support organisations report that rising energy, food and fuel bills are heaping extra pressures on the already stretched budgets of carers, care workers and social care services.

While the campaign says action is needed to alleviate immediate financial pressures, it is specifically calling for the Scottish Government to create a new commitment – known as a “National Outcome” – to help tackle the long-standing undervaluation of care. It comes as the Scottish Government prepares to launch its first review of Scotland’s existing 11 National Outcomes – the goals which it says describe ‘the kind of Scotland it wants to create’ – for five years.

Sara Cowan, from the Scottish Women’s Budget Group, said: “Politicians have repeatedly praised those who provide care in Scotland, but they must now embed an ambitious and measurable National Outcome on care to help drive transformative policy and spending action – and ensure progress is properly tracked.

“Care is the backbone of our society, but it is badly under-valued and suffers from chronic under-investment. This is impacting all of us, but women face the deepest consequences because they provide most paid and unpaid care.

“Alongside immediate action to alleviate the cost-of-living crisis, we must end the invisibility of care and carers within Scotland’s National Outcomes so that investment in care is placed at the very heart of policy and spending priorities.”

Created by Oxfam Scotland, Carers Scotland, the Scottish Women’s Budget Group, Scottish Care and One Parent Families Scotland, the joint campaign is now backed by over 45 organisations – including Carnegie UK, IPPR Scotland, the Wellbeing Economy Alliance Scotland, the Minority Ethnic Carers of Older People Project, and Barnardo’s Scotland. They say the lack of a dedicated National Outcome on care ignores the foundational importance of care to the wellbeing of individuals, households, and Scotland as a whole and leaves all forms of care undervalued – whether it is on a paid or unpaid basis, for children or adults, or for people with or without additional support needs.

The people of Scotland – and particularly those with personal experience of any form of care – are now being asked to send a personalised letter to the First Minister and the other party leaders using a dedicated website – www.ascotlandthatcares.org/ – set up to make the process straightforward.

Fiona Collie, Head of Policy and Public Affairs at Carers Scotland, said: “For too long, all forms of care have been undervalued in Scotland leaving too many people who provide care struggling without the financial and practical support they need. The pandemic and the cost-of-living crisis have only made matters even worse.

“We urgently need to inject additional funds into our care services, but only by fully valuing and investing in those experiencing care, and all those providing it, can Scotland build resilience to current and future shocks. We’re urging the people of Scotland, but particularly those who live with the day-to-day realities of care, to join us in calling for Scotland’s politicians to set this new National Outcome, and then to work quickly to deliver it.”

The campaign recognises that a range of initiatives could improve how we value and invest in care and carers in Scotland – such as a new social security entitlement for unpaid carers, additional investment in a reformed system of social care, and steps to better support low-income parents via the upcoming increase in the Scottish Child Payment.

However, it says progress is too slow and too shallow and those who rely on, or provide care are paying the price, including challenges in accessing sufficient levels of care, as well as poor working conditions, insufficient social security entitlements, and a lack of adequate respite for those who provide care. Caring is also deeply linked with poverty.

Jamie Livingstone, Head of Oxfam Scotland, said: “It’s clearer than ever that the wellbeing of our entire society depends on care but, right now, a failure to sufficiently value and invest in this care is a key barrier to ending poverty.

“The cost-of-living crisis is simply multiplying the pressures long faced by those who provide care and, while some initiatives underway in Scotland have the potential to create positive change, the invisibility of care within Scotland’s existing National Outcomes is unacceptable and must now end. The Scottish Government, with cross-party support, must use the upcoming review process to show they are fully committed to building a Scotland that cares.”

Academics at the University of the West of Scotland have developed a blueprint for a new National Outcome on care, and have identified seven ‘Beacon’ National Indicators which they say should be used to monitor progress, in addition to capturing people’s lived experience of care. They say the introduction of a dedicated National Outcome on care would make Scotland one the first countries in the world to make such an explicit commitment.

Alyson Vale, Business and Operations Director from Abbotsford Care in Fife, added: “People deserve the opportunity to receive high quality care in their local area. Scotland has a dedicated and passionate caring workforce, but we need investment from government so that we can deliver the changes needed, both now and for creating a more sustainable care system to cater for the future care needs of our nation.

“A dedicated National Outcome on care would show that our government is committed to valuing care and those who provide care as essential to our society.”

The report by academics at the University of the West of Scotland – Towards a Scotland that cares, A new National Outcome on care for the National Performance Framework: http://uwsoxfampartnership.org.uk/wp-content/uploads/2021/11/NPF-Report.pdf