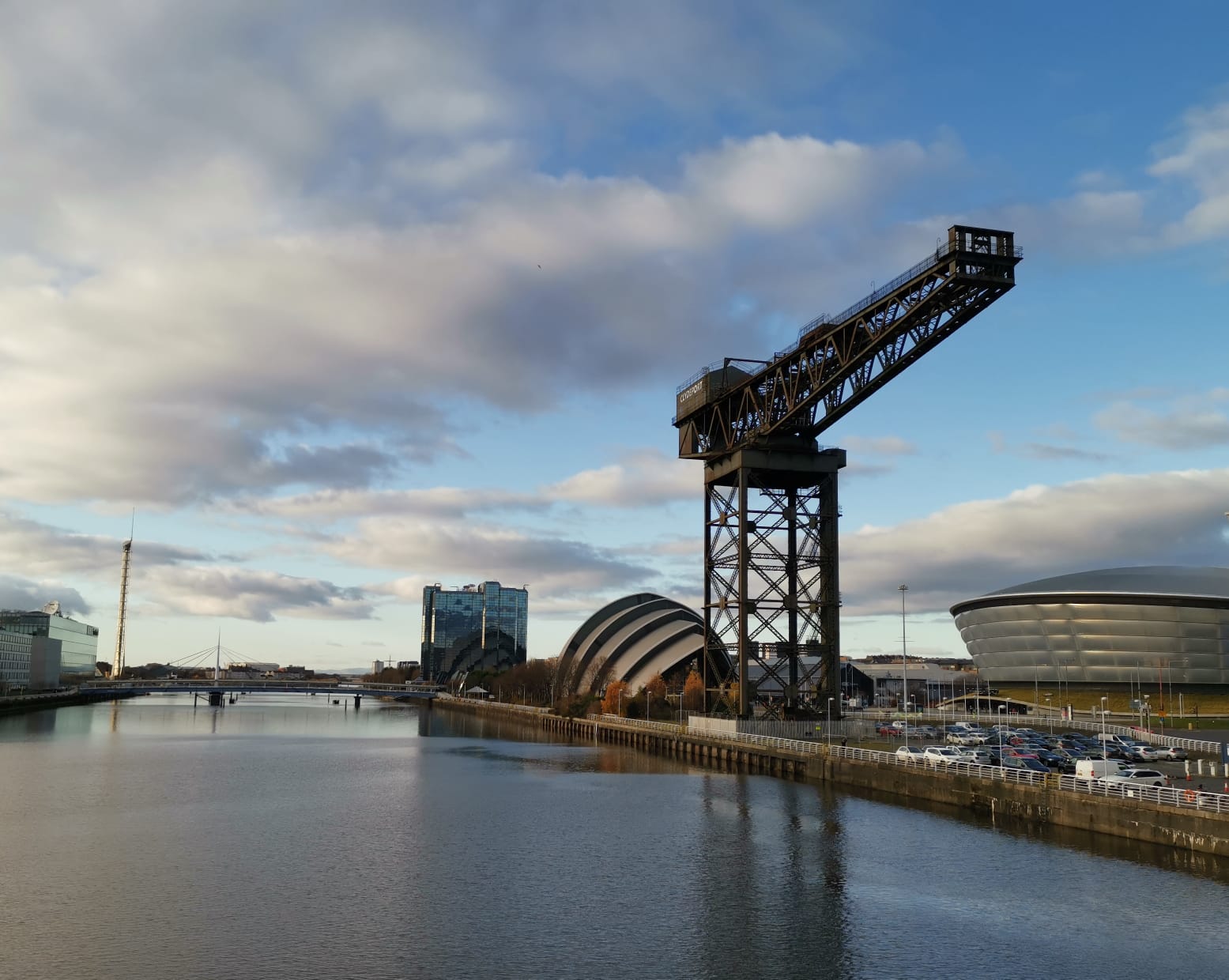 As Scotland launches its “indicative” Nationally Determined Contribution, the home of COP26 could inspire global climate action at the Tartan Talks

“People make Glasgow”, proclaims the banner from a tower block overlooking this post-industrial city which, in just 100 days, will host arguably the most significant global climate talks ever held.

The outcome will add a new chapter to a story in which Glasgow has featured prominently before.

It is the place where the inventor James Watt made critical enhancements to the steam engine, discoveries which catalysed an industrial revolution that helped propel the city to become a trading port with global reach.

Today, the shipyards on the River Clyde and the heavy industry have all but gone, but the scars of post-industrial economy remain; prosperous neighbourhoods sit side-by-side with communities left locked in deep poverty.

Pandemic-allowing, the streets of this evolving and vibrant city in the west of Scotland, one synonymous with protest – from those against apartheid and regressive new taxes to, more recently, Black Lives Matter – will be alive with demands for climate justice.

The people of Glasgow will gladly – and loudly – stand in solidarity with those facing climate injustice today. The critical latest instalment of the talks, delayed by a year due to COVID, are arguably the most significant yet; they certainly need to be.

Five years on from the landmark Paris Agreement, they will determine whether the world is prepared to do what is necessary to prevent global temperatures from crashing through the 1.5C barrier.

No level of climate change is safe; people’s lives are already being lost with rising global temperatures increasing the frequency and severity of extreme weather, like droughts and floods, and fuelling poverty and hunger.

Yet warming beyond 1.5°C would be catastrophic and, without new action, the world will breach this threshold within fewer than nine years. Temperatures will then keep rising. Based on current policies, they could reach 3°C or more of warming by the end of the century:  some experts believe that such a rise could put the stability of human civilisation in peril.

As a country of approaching 5.5 million people, Scotland’s emissions are a mere pin-prick in the global total and therefore its ability to have a significant impact on this unfolding disaster is normally limited. Yet, as home to the host city for COP26, Scotland will never have a better chance to inspire global climate action.

Encouragingly, Scotland goes into the talks with a relatively strong track record. Positively, domestic emissions have already more than halved since 1990, driven by shifts away from coal, and they continue to fall – though progress is getting harder to achieve without impacting people’s lives.

With climate change a devolved power within the United Kingdom, the Scottish Parliament in Edinburgh has set amongst the strongest legal climate emissions targets of developed countries, with these bolstered by a robust monitoring framework.

Scotland is committed to reducing emissions by 75% by 2030 and is scheduled to achieve ‘net zero’ by 2045. While these targets fail to reflect the emissions created by the manufacture of goods produced internationally but consumed in Scotland, they do include a share of emissions from international aviation and shipping. Importantly, the legislation also requires annual reporting and, while the Act allows for some use of carbon offsetting the Scottish Government has committed not to use them.

Yet history will not judge Scotland’s commitment to climate justice on ambitious sounding promises or legislation. It will do so based on the speed and depth to which Scotland’s emissions actually fall, and Scotland’s record is very far from perfect.

Worryingly, despite a year-on-year fall, Scotland missed its climate change emissions reduction target in 2019. This completes an unwanted hattrick of misses, having also failed to achieve the annual targets in 2017 and 2018.

The Scottish Government, newly elected in May, has promised a “catch-up plan” and Scotland’s strong climate movement is increasingly impatient for it to realise ambitious targets and rhetoric on climate justice.

Cutting emissions will need change, lots of it: by individuals and communities, and by the industries that serve them. That much is clear. That much is unavoidable. Take oil and gas – a sector of huge importance to Scotland.

The Commission set up by the Scottish Government to help steer a “just transition” from high- to low-carbon activities while creating benefits and opportunities for people across Scotland says this must be a “national mission”.

Scottish Ministers must therefore be acutely aware of the hammer blow that the UK Government’s impending approval of a new oilfield off the coast of Shetland would land.

Pulling a reported 150 million new barrels of oil out of the ground in the field’s first phase alone, let alone over its four decade-long expected lifetime, is hard to hide as the world looks to the UK – and Scotland – for climate leadership. It should be opposed.

In other circumstances, aiming high, but falling short could perhaps be excused. But the climate crisis affords no such luxury: a failure to cut emissions in line with what science demands costs lives.

While the Scottish Parliament does not have formal powers over international development, this reality is reflected in the Scottish Government’s creation of the Climate Justice Fund.

At its heart, this Fund – which unlike too much global climate finance is separate and additional to the Scottish Government’s wider international development contribution – recognises that those who are impacted by climate change first and worst are least able to cope with its consequences.

The Government’s pledge to double the Fund after a five-year freeze is a timely recognition of Scotland’s past, and current, emissions and a very welcome contribution to plugging the major gap in climate finance globally.

As UN Secretary General Antonio Guterres warned, the success of COP26 rests on rich countries rebuilding trust by fulfilling their promised financial support to low-income countries to help them adapt to the climate crisis.

And so, on mitigating our emissions and supporting those worst impacted to adapt, Scotland approaches COP26 with a relatively strong and hopeful, though imperfect, story to tell.

It is one the Scottish Government, with the encouragement of civil society in Scotland, has now chosen to promote on the international stage through the publication of an “indicative” Nationally Determined Contribution (NDC).

As a member of the UK, rather than an independent country, Scotland isn’t a signatory to the Paris Agreement, so isn’t required to outline their national effort to cut emissions and adapt to the impacts of climate change.

Scotland’s indicative NDC is therefore entirely voluntary, and that’s what gives it power: Scotland is laying down a relatively high marker for every country to emulate when they arrive in Glasgow just 100 from now.

At a time when global ambition is essential, its publication is very welcome.

Of course, to be a credible international climate champion, Scotland must do more to – at an absolute minimum – deliver the emission cuts it promises and, like all nations, it must be honest about the level of progress being achieved.

Scotland is aiming high and is achieving progress. But we’re finding it hard and, right now, we’re falling short. We  must therefore put in place the measures needed to get firmly on track for our 2030 emissions reduction target.

As we do so,  the Scottish Government must also do everything in its power before and during COP26 to ensure Scotland’s example is heard, including as the European Co-Chair of the Under2 Coalition and through its leadership of the Wellbeing Economy Governments initiative.

And it must also fulfil commitments to place the priorities of impacted communities at the very centre of its own agenda for COP26. The Government’s decision to co-host so-called “Glasgow Dialogues” – working with civil society to capture, understand and amplify the experiences and expertise of people living on the frontline of the climate crisis offers an important example for COP26 to follow.

Scotland may be small, but the message of climate hope it can send to the world ahead of COP26 is significant. When the countries of the world arrive in Glasgow, they must realise that hope: after all, failure is not an option.