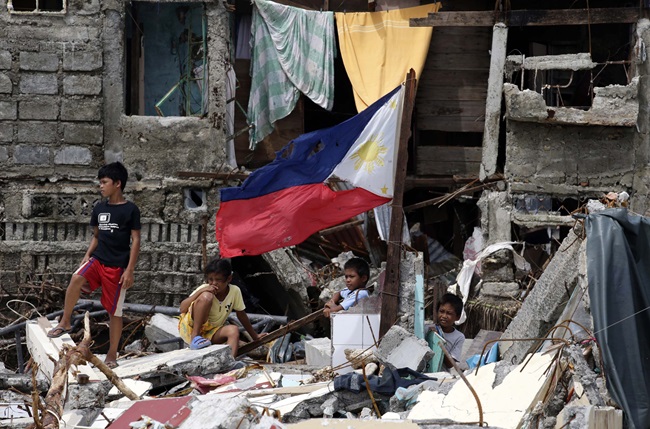 Hearing of the effects of the typhoon was heart wrenching for one man from Tacloban who now lives with his family in Cardiff. Hugh dela Cruz moved from the Philippines over twelve years ago, lucky to be recruited out of 800 applicants. He came to Cardiff as part of the second wave of nurses to leave their home country for Wales.

His wife moved over two years later and is a qualified nurse working in a nursing home in Cardiff. They have four children and seeing the dramatic images on television and in the newspapers is difficult says Hugh.

“I have spoken to my family once since Haiyan hit, communication is difficult but I know that they are together. My father is 73 years old and is struggling, they lost the roof of their home in the typhoon and my father and other family members have to move to find shelter every night. Everything is soaking wet there, they need shelter to keep them dry and warm at night.”

Hugh was trained back in his homeland in disaster management planning, he has seen a lot over the years;
“We would react to airplane crashes, respond to crisis at sea and natural disaster. I was part of a team who responded to a bad landslide and a number of people died. We would always rescue first and move people to a safe place before we could begin treating them.”

“Doctors would also use a tagging system by using specific colours on the injured. Red was for those who needed urgent attention, yellow was less urgent, green was for those walking wounded and black was put on the dead. This system has probably been adapted since then but essentially it would be the same. I feel so helpless, I have this training but can’t use it to help them.”

The worst thing for Hugh dela Cruz is knowing that this system is now being used on his own community.