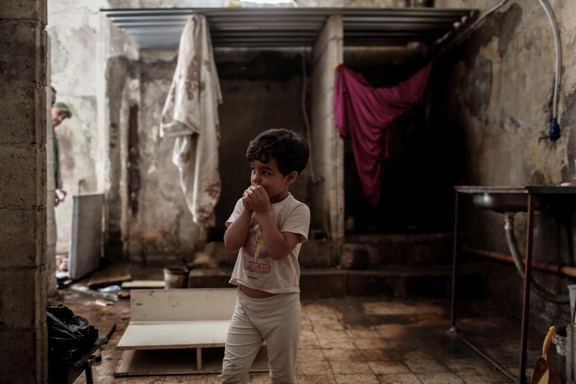 Photo: Shayma’a, 6, in the washing and bathroom are of the warehouse her family rent in Bab al Tabbaneh in Tripoli, Lebanon. Credit: Sam Tarling/Oxfam #

Matt Hemsley, Oxfam Cymru’s Campaigns and Advocacy Manager is spending the week in Lebanon, learning more about the refugee crisis.

Tripoli is Lebanon’s second city.  In the north of the country, on the coast, it still provides a resort holiday destinations for the middle classes.  In fact, many Syrians used to holiday here on a regularly basis.

But it is a city that has suffered conflict and now extreme poverty.  The unemployment rate is 35% and about eight in ten residents live below the poverty line.  There has been a huge influx of refugees from Syria, both Syrian and Palestinians from across the border.  This has added to the challenges in the city.

There is a lot of good work going on to support people here, though, to support and, importantly, empower communities.  Oxfam is launching a livelihoods project here that will engage businesses to identify skills gaps and work with local people, especially young people, to help to fill them – providing individual support along the way.

I also got to meet with the team at Najdeh – an organisation working in the urban camps where Palestinian refugees from Syria are living.  There’s an important point here – we probably all think of refugee camps as tented communities, but here in Tripoli huge numbers of the refugee population are living in incredibly densely populated urban areas.  Walking briefly around some of these communities you can really sense the tightness of it all – there is a lack of space to move.  In the Palestinian
camps, which have military checkpoints at the entrances and exits, the conditions are poor.

What is strikes me when talking to all of the people involved is the commonality between challenges faced here and at home.  For example, refugee communities lack the knowledge and information required to access basic public services and legal support.  More of this is now being provided; Najdeh has created an almost “Yellow Pages” of key NGOs and other contacts for refugees, so they know where to go. Workshops are also organised so people can learn more about their legal rights.

Formerly, Syrians living in Lebanon who wish to apply for a residency permit and do not have a Lebanese citizen as a sponsor,  had to make a pledge not to work among the other documents needed to obtain residence. While the Government has recently announced that this will be turned into a pledge to abide by Lebanese laws, this is not being uniformly enforced and obstacles remain. The only other alternative is for a refugee to find a Lebanese citizen willing to sponsor them. For those who don’t hold residency documents, risk of arrest at checkpoints becomes higher.  Providing legal support so people know their rights is crucial.

Most of all, though, what I take from Tripoli today is that local organisations and people here have the ideas and knowhow to empower and improve their communities – and we need to support them.  But there remain tensions, and if Europe and the UK could resettle more refugees, it would make a big difference.

If you want to show your support for refugees across the world, including here in Wales, join us in Swansea a week Saturday (17th Sept) to Stand As One with refugees, and show our political leaders we want action. You can sign up to the event here: https://www.facebook.com/events/1162926417079874/