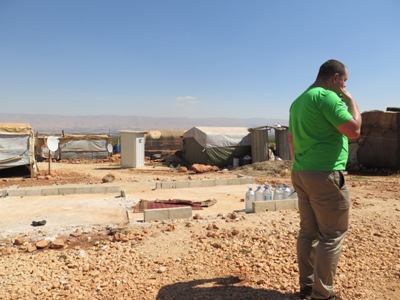 Photo: Matt at an informal settlement in North Bekaa

Matt Hemsley, Oxfam Cymru’s Campaigns and Advocacy Manager is spending the week in Lebanon, learning more about the refugee crisis.

“Our boy has only one kidney.  That is also a big problem”.  That was one part of one story I heard this afternoon in one of the many tented communities in Lebanon’s Bekaa Valley that are hosting Syrians fleeing their home countries.

One family – three generations- had recently arrived here from Raqqa.  They had lost a family member on the way, arrested, and didn’t know where he was.  With their father missing the two young girls are out every day working in the fields to earn what money they can.  Each day a bus picks them up at 4am – it drops them back at 11pm.  It is their little brother who lacks a kidney.  They don’t know if he can get help.  He still maintained good spirits, though, telling us (with a grin) that he never misbehaves – a view I am not sure his family
share.

I met another family with a little boy, two and half, who needs an eye operation.  His sight is so impacted that it affects his balance and so he falls over a lot.  His family also had little and they were sewing other unwanted garments together to try to make pillows.

Two other men told me of their great life in Syria, how they loved their city and that it was the greatest place on earth. Or it had been.  They had had to flee as things changed. Now life is very difficult for them. The community tries to work together here in the camp, but it is tough.

It is a powerless feeling being in this community.  There was nothing I could do to solve these big problems. Yet we know that resettlement provides people with the protection they need – which means that we in Wales and the UK can make a difference to the lives of people living here in the Bekaa Valley.

Life has been made more bearable here by new latrines and water tanks that Oxfam has been able to provide.  When I arrived a small meeting was in place, where a group of camp residents – elected by their peers – was discussing some of the issues and how they could make things better.  Supported by Oxfam staff, a discussion was in place about how they could get bins to dispose of their waste and how often the local municipality might be able to collect them.

These people were all people who had jobs, were at school and lived professional lives. Now they had been forced to flee – having to spend much of the money they have just to get away.  They hope they can return to Syria.

One older lady told me that she hoped my country never went through anything like hers. I’m not sure I had a response.

If you want to show your support for refugees across the world, including here in Wales, join us in Swansea a week Saturday (17th Sept) to Stand As One with refugees, and show our political leaders we want action. You can sign up to the event here: https://www.facebook.com/events/1162926417079874/