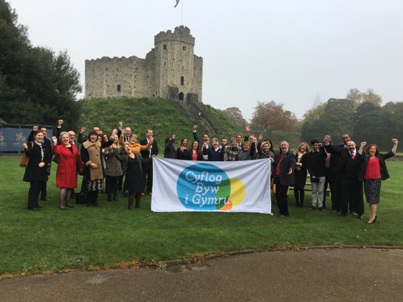 Today in Wales, about a quarter of the population are living in poverty – that’s 700,000 people.

What’s perhaps more shocking is that many of these people have jobs. Wales has a particular issue with low pay, and more than a fifth of workers in Wales are earning less than the Living Wage.

The Living Wage is a voluntary pay rate. It is set independently based on the basic cost of living. The new Living Wage announced this week is £8.45 an hour.

This week is Living Wage Week, a UK wide celebration of the Living Wage. It’s a chance for us all to showcase those employers, private and public sector, which pay the Living Wage – and highlight to others why there are benefits to employers, as well as employees, of paying people an hourly rate that is linked to the cost of a basic lifestyle.

Oxfam Cymru has been out talking to employers and workers across Wales about what the Living Wage means to them.

We spoke to Anna Wilcox, a Domestic Assistant at Cardiff University, about the impact being paid the Living Wage has had on her life. “Before I had to have two jobs to meet a certain amount a month to make ends meet and having a bit extra to spend on my child. My daughter likes to go to the swimming pool occasionally or go to Starbucks! So I had two jobs, but it meant a lot of rushing around. Picking her up from school, rush her dinners through, then wait for her brother to come home when I had to go back to the other job then come back home late and then being really too tired to
interact with her”.

We also met John Burns, the Managing Director of Burns Pet Food Nutrition in Kidwelly about why they pay their staff the Living Wage. John told us, “My late father in law said that money is made to go round, and the economy depends on people being reasonably well off, so that they can afford to buy and use services. It’s important for the community as a whole that there’s a sense of equality and fairness in the community at large”.

Whilst there are positive stories like these right across Wales, there are still too many people experiencing in-work poverty. The Living Wage is not a panacea, but it is a great first step to tackling poverty.  Living in Wales on less than the Living Wage is more like survival. Oxfam Cymru doesn’t want to see a Wales that is surviving, but a Wales that is thriving. Government and business should do all that they can to ensure every worker in Wales is paid a wage they can thrive on.

Watch our Living Wage Week video now – and share it on social media!