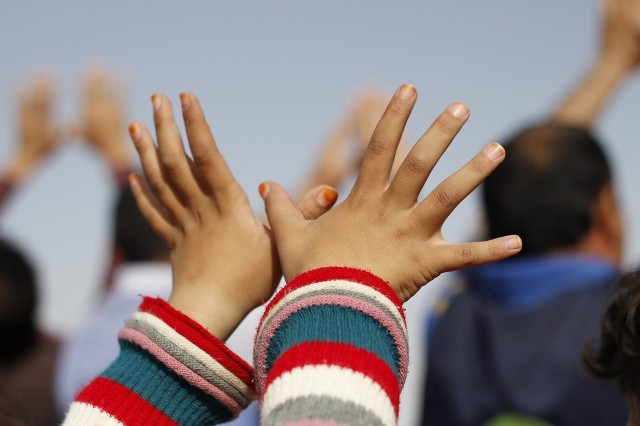 Over the past few months I have been privileged to work with Oxfam and our partners on the Welsh Refugee Coalition to support the Equality, Local Government and Communities Committee inquiry into refugees and asylum seekers in Wales.

At the time we started asking for the Committee to prioritise an inquiry into Wales’ response to the refugee crisis, the number of forcibly displaced people worldwide was 65.3 million. This has since increased by 300,000 people.  By the time you finish reading this blog 20 more people will have had to grab their families and run, leaving everything they know and love behind to try to find a safe place and a chance of a new life.

A tiny proportion of these people find themselves in Wales. Welsh Government does not have devolved power to control the numbers of displaced people we welcome within our communities but are able to have a significant impact in areas such as health, housing, education and social services. The inquiry exposed  inadequacies in mental health support for people who have experienced emotional trauma, brought to light many photographs of asylum housing – ‘homes’ where none of us would want to live and exposed significant barriers to integration including poor ESOL (English for
Speakers of Other Languages) provision.

I have been hugely impressed by the thoroughness of the Committee inquiry and of the willingness of its members to really listen to the voices of displaced people living in Wales. The inquiry report is a testament to both the work of the Committee and to those that have given up their time and expertise to contribute to it. Over the years, I have been fortunate to get to know people from the refugee and asylum seeking community in Wales. We are incredibly lucky to be able to offer the hand of
friendship to such humble, uplifting and resilient people. For the first time in many years of policy work in this field, I feel things will significantly change for the better. The Welsh Refugee Coalition and its members are a force to be reckoned with and will make sure that the recommendations from this inquiry are delivered.

I was delighted when the Welsh Government response to the report accepted or accepted in principle 18 out of the 19 recommendations put forward. Better still that positive change is already happening as a result of the inquiry. For example, action is now being taken to improve asylum housing and the Welsh Government has committed to revise the Refugee and Asylum Seeker Delivery Plan, which sets out how these policy changes will be implemented. Perhaps, most gratifying of all is unanimous agreement by
both the Committee and Welsh Government that Wales should take steps to become a Nation of Sanctuary. For many it has been a long journey to get to Wales – a Nation of Sanctuary but if we can achieve this then what better testament to our role as a globally responsible nation?

For the tiny proportion of displaced people finding themselves in Wales – we welcome you, we support you, we celebrate what you bring to our communities and we look forward to a shared future.