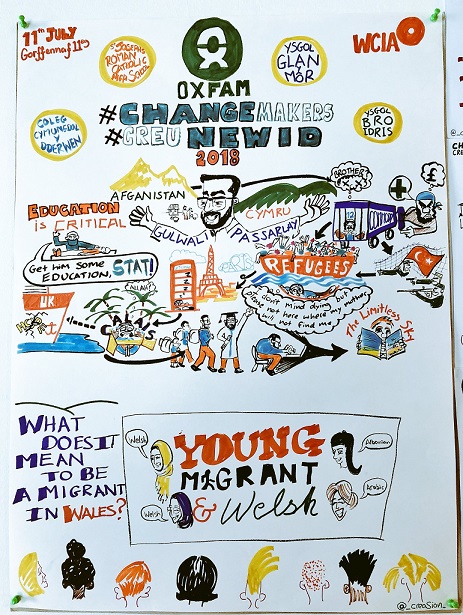 Today pupils from across Wales took part in an inspirational conference about refugees and asylum seekers at the National Waterfront Museum in Swansea.

Pupils from four Welsh schools joined in a conference jam packed with energetic workshops and inspirational talks. The event marked the end of ChangeMakers, a project led by Oxfam Cymru to help develop young learners into globally responsible citizens.

The main event for the pupils was a moving talk by Gulwali Passarlay, a refugee who fled from Afghanistan to the UK when he was 10 years old and has gone on to become a writer and activist. His inspirational and powerful story, chronicled in his autobiography The Lightless Sky, has sold thousands of copies in several languages.

The day also featured workshops with Wales for Peace, Young, Migrant and Welsh, and the Waterfront Museum which is also the UK’s first Museum of Sanctuary.

Ahead of the day, the pupils have been busy exploring the refugee crisis through a series of workshops delivered by Oxfam Cymru, where they learned about the hard lives of refugees around the world, and the constant challenges they face in their journeys to find sanctuary and peace. They heard directly from asylum seekers living in Wales about their experiences before working together to creative positive action plans create change and influence their peers.

“We organised a sleepover for the school to show the conditions refugees and asylum seekers have to live through when fleeing for safety. We got the permission from the Headmaster, and we did the sleepover at the school hall, where everyone slept in lines of sleep bags, like they do in refugee camps. We also raised money by doing this. It was a good experience”.

“Before I started the project, I was one of the people that thought that refugees and asylum seekers should not come to this country. After the ChangeMakers project, I have learned that it is not their fault, and that they are only coming here because they have to, not because they want to, and they want a better life. They have no money to live on, and refugees and asylum seekers have a very hard life.”

“ChangeMakers has been a fantastic way to help young people learn and think critically about real issues that face the world today. The refugee crisis can often seem like a daunting subject to teach and understand, but through workshops and today’s conference the pupils have engaged with the subject with sensitivity, enthusiasm, and energy.

“It’s been a pleasure to see everyone sharing their ideas and passion today. Our young people in Wales are truly setting an example for everyone on being compassionate, globally responsible citizens. It is events like these that further cement Wales’ commitment to being a Nation of Sanctuary”.