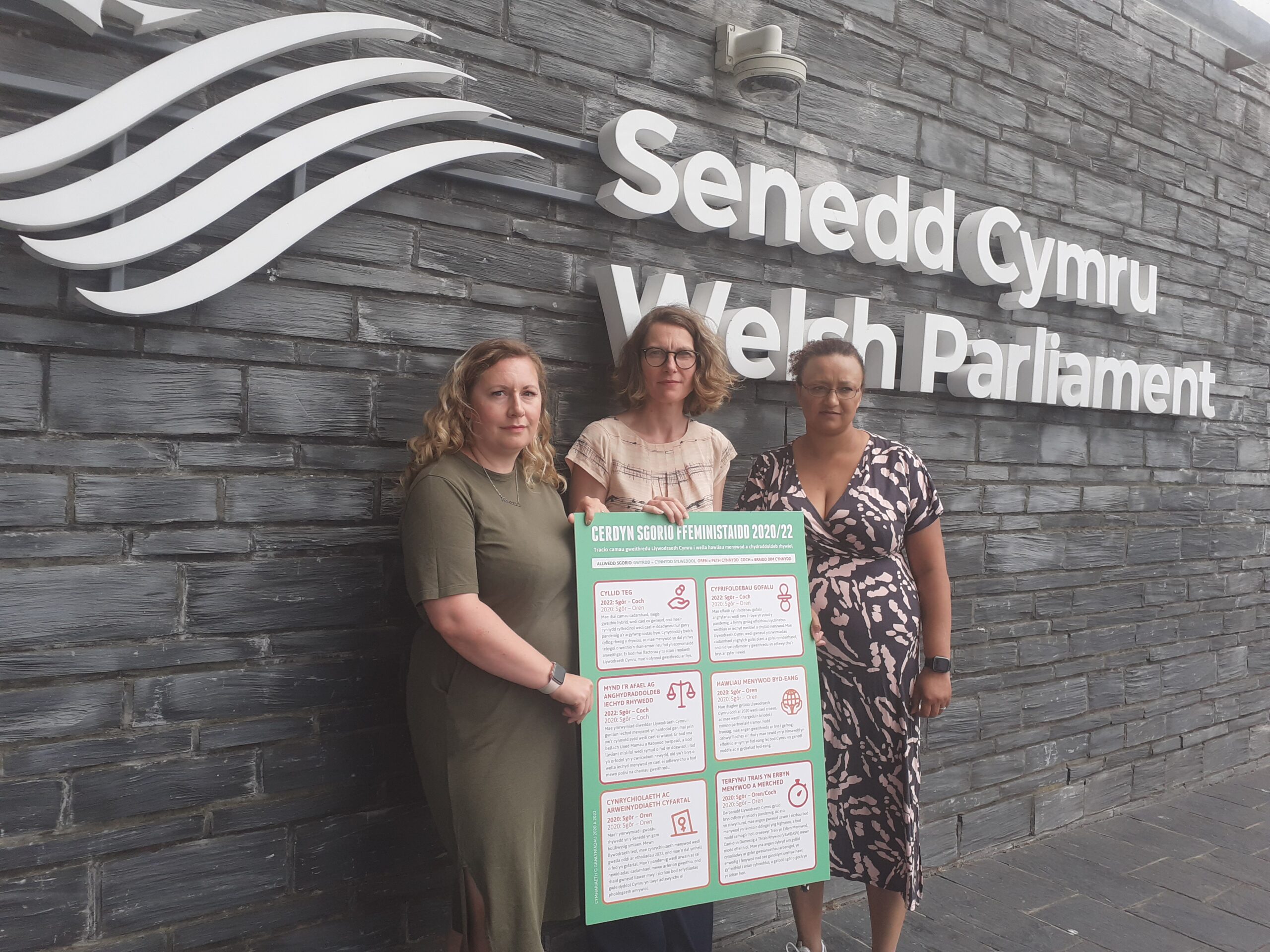 Beyond rhetoric, the women of Wales need bold action from the Welsh Government. Unless we act now, gender equality will be lost for another generation.

Today, Women’s Equality Network (WEN) Wales and Oxfam Cymru will jointly publish The Feminist Scorecard 2022. The scorecard uses a traffic light system to grade progress and highlight action required across six key areas including Tackling Gender Health Inequalities and Ending Violence Against Women and Girls.  It was written with input from organisations across the third sector so strongly reflects lived experience and current concerns.

Our report shows that focused actions are required to reach the ambition of making Wales a feminist nation and  the safest place in Europe to be a woman.

Compared to the previous Scorecard produced on the cusp of UK Covid-19 restrictions in February 2020, it’s clear that the little progress previously made was fragile, failing to stand up to the pressures of the pandemic and the ongoing cost of living crisis.

As the Welsh Government responded to coronavirus, the Advancing Gender Equality in Wales Plan was put on ice whilst women were at the forefront, providing key work and care for our nation. Leading the response across the community; in hospitals, care homes, schools, supermarkets and the home, women’s workloads escalated dangerously.

As women adapted and changed, the system did little to facilitate or support them. The negative impacts of unequal caring responsibilities were felt sharply, with sometimes disastrous effects on women’s mental health and finances.

Why does the Feminist Scorecard matter? Because women’s rights are human rights. This report has been produced against a backdrop where women and children fled war in Ukraine. In recent weeks the constitutional right to abortion was revoked in America. Across the UK transgender rights are constantly under public scrutiny, fuelling increasing hate crime.

We are at the brink of huge societal change, where decisive action from the Welsh Government needs to ensure that progress for women and girls is not hampered.

Coronavirus has shone a spotlight on the challenges that women and girls face and has exacerbated inequalities, particularly for women who experience intersecting discrimination. This widening inequality is reflected in the Scorecard results, which show that we have moved backwards on the areas of Fair Finance and Caring Responsibilities.

The gender pay gap increased and women are still more likely to work part-time or be economically inactive, which makes them more vulnerable to rising costs of living. A persistent lack of affordable high quality childcare or social care means that women with unpaid caring responsibilities are often unable to enter employment or increase their working hours. Welsh Government has made positive commitments around childcare and social care, but the pace of action does not reflect the urgency for change.

The same is true in the area of Gender Health Inequalities. The Welsh Government’s commitment to a women’s health plan is an important step, but the reality is women lack access to the health care services they need. The pandemic has exacerbated this problem, as procedures were postponed and the waiting list became much longer.

While Ending Violence Against Women retained its amber score overall, the lack of improvement for the dire situation faced by women with no recourse to public funds, and the continued absence of a sustainable funding model for specialist services is reflected in a red sub-score for these areas.

As a globally responsible nation Welsh Government prioritised climate change in their agenda for the Sixth Senedd, it is pertinent to see gender and climate justice as integrated issues. The high cost of fuel is forcing fast-paced change, however potential investments in female-dominated, low-carbon sectors must be considered as we transition to net-zero.

Although we’re clear that much remains to be done, some positive promises have been made, such as the historic commitment to gender quotas and expanding the childcare offer to all two-year-olds. But more urgent measures must be taken to counter the widening inequalities happening within our society and to put us in a position where we can move any area to a green score.

The last couple of years have shown what can be achieved as we all pulled together to fight the pandemic. It is time for us to recognise gender inequality, and its impact on women’s safety, health and well-being, as a pandemic that harms everyone in our society and that we need to eradicate for good.

We believe it’s critical that the government creates the role of a Women’s Commissioner, making space for an appointee who would champion and be the guardian of women in Wales, as the Children’s Commissioner and Older Person’s Commissioner do for their respective constituents. Without a strong focus on gender inequality and how to address it, the work that is so desperately needed will not be done.

The Feminist Scorecard 2022 is available to read in Welsh and English.

This article  originally appeared in The Western Mail.